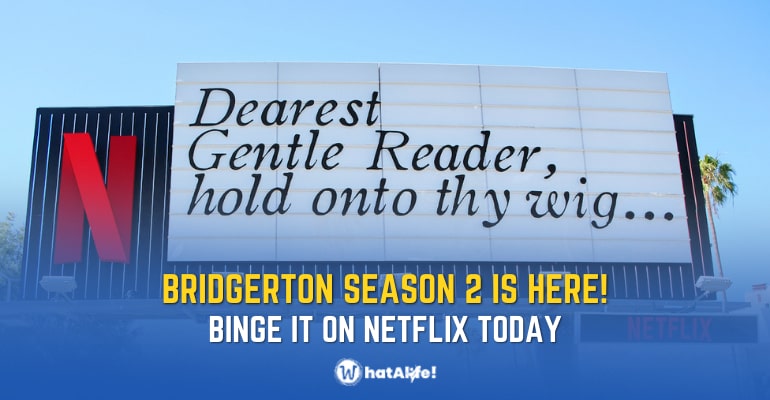 The long-awaited period romance drama is here! On March 25, 2022, Netflix served us Bridgerton Season 2 on a silver platter. RSVP at our earliest convenience.

According to JustWatch, the first season was one of the country’s Top 10 most-enjoyed shows.

The Bridgerton series is set in the Regency Era, but not really. As many have noted, the series is swimming in anachronism stew. (Anachronism Stew is a trope that means that the media’s creators take lots of artistic licenses, resulting in historical inconsistencies.)

It centers on the titular Bridgertons, a noble family who have fallen from grace following the death of their father, a Viscount. In Season 1, they planned to get their fortunes leveled up with a good marriage to their eldest daughter, Daphne.

When we last left off with the Bridgertons, Daphne had been married to and started a family with Duke Simon Basset, upping the family’s reputation. Now, it’s her brother Anthony’s turn to choose. Many might remember him as the shortsighted jerk who nearly married his poor sister to a sleazy nobleman — the “noble” being as kind a compliment as possible.

Thankfully, with some machinations between Daphne and Duke Simon Bassett, we were blessed with a fake dating romance rife with tension!

So maybe His Highness is too busy handling things at home.

Still, many Simon (and Regé-Jean Page) fans are disappointed that he won’t be returning this season. However, it’s pretty on-brand. Each book of the series deals with the relationships of the young, marriageable Bridgerton siblings.

This leaves Daphne to stay and guide her siblings down the road of matrimony. Considering she’s the first one of the bunch to get married, Anthony might take a detour from what his duty requires.

Based on the second of the Bridgerton book series by Julia Quinn, the season two plot is intriguing. With the book titled “The Viscount Who Loved Me,” oldest son Anthony Bridgerton is our current focus.

And more importantly, to the high-class Regency society, he’s primed to take a wife to fulfill his Viscountly duty.

Viscountess Bridgerton even calls “Open Season” on her son at the very beginning of the Official Trailer. (“You honestly just did that?” he asks, exasperated. “I believe I did,” his mother counters gleefully.)

And the best lady for the job might just be Edwina Sharma. As a fresh debutante, she’s in the same position as Daphne was last season. Considering how Edwina’s painted by the trailers, she might even be this year’s Diamond of the First Water! Naturally, Edwina is nothing to scoff at. Considering how highly sought after she is by the marriageable men of the ton, Anthony has stiff competition.

However, if Viscount Bridgerton wants to get to Edwina, he will have to go through her older, more established sister, Kate. From the sneak peek of her very iconic dressing-down of Anthony, we can tell she’s tough as nails and takes no prisoners.

Kate can also tell that Edwina and Anthony’s ideas of marriage don’t really mesh well. As mentioned earlier, Anthony needs to carry on as Viscount Bridgerton. So, he needs to choose a wife, but “only out of love for [his] family.” On the other hand, Edwina wants someone “charming… and handsome.”

Anthony has the latter two in spades, at least. But Kate rightly knows that he doesn’t believe in the kind of love Edwina deserves — a True Love match.

And if that wasn’t enough, it turns out that Anthony and Kate might have more chemistry than either of them intended!

Plus, we’ve got the intrigue that is Penelope Featherington‘s stint as Lady Whistledown, the lady with her ear open to all the gossip about current (and show-centered) relationships.

We do love a girlboss with her own business, even in the show’s general time period. Especially considering the time period! Life during the era wasn’t a cakewalk for women, no matter how many pretty dresses and ringlets you wore.

However, considering the kind of criticism Penelope’s alter ego, Lady Whistledown, had slung at the Queen last season, she might be in hot water herself. Also, the Bridgerton son she has feelings for might be back.

Not only that, but another praiseworthy concept for the series is the representation. It seems like the Sharmas aren’t like Simon and his family. For one, their surname Sharma originates from India and Nepal.

One of the trailers even showcased vibrant marigold flowers hanging from the ceiling! (We only glimpse them from the very top of the frame, but they’re still noticeable.) Also, the brightly colored flowers have spiritual significance to Indian culture. And, they’re used at weddings. So, make of that what you will.

Oh, to all the dog lovers: The Sharmas have a corgi named Newton!

Ah, such flutterings and spasms about us! Don’t just dally here. Go out there and experience Bridgerton Season 2 for yourself! Here are the Season 2 episode titles:

This latest season is just one of March’s 2022’s most anticipated Netflix offerings. Watch it today on Netflix! – WhatALife! / Alex