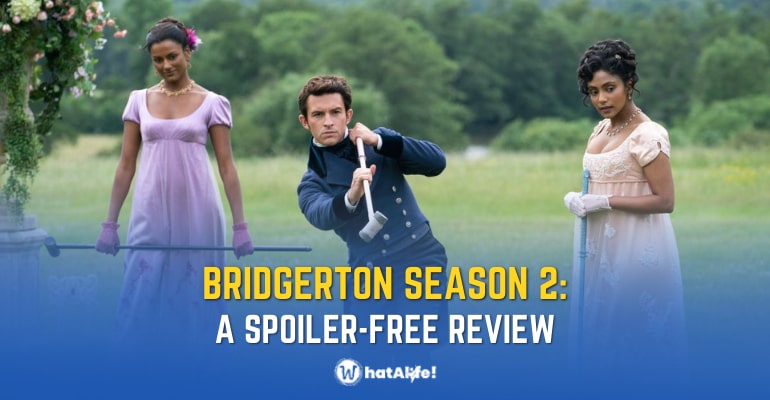 Bridgerton Season 2 has arrived, and here are our first impressions, a.k.a a spoiler-free review for our dearest gentle readers!

On March 25, Bridgerton Season 2 came out to society via Netflix! Because its release was positioned just before the weekend, it’s been the talk of the digital tons.

Bridgerton Season 2 starts at the same time as the English Social Season. So, we watch the same journey Season 1 protagonist Daphne undertook. But, of course, we’ve got entirely different players, including her younger sister Eloise.

Many people had speculated that the second season would come in December of 2022, just like the first season’s release in 2020, rather than March. So imagine our surprise when it came faster than we all anticipated!

Netflix’s Bridgerton, the belle of the ball

Bridgerton clocked in at #7 out of the Top 10 Trending Shows of 2021, according to Google Philippines. So, it’s no surprise that it’s a fan favorite of many romance lovers.

The anachronistic period drama delivers looks from various periods, not just the Regency era. This adds to the ambiguity of the series’ time period, despite attaching it to 1814. Not only that, but you can see far more representation than the average English period drama.

One excellent addition to the series is the string quartet covers of various famous songs in pop culture. For example, one may remember the string version of Taylor Swift’s Wildest Dreams in the more adult escapades for Simon and Daphne’s relationship. Well, Season 2 came back swinging, with several new tracks! Glamour’s got all the soundtracks for this season lined up. (But be warned that everything past the tracklist veers into spoiler territory!)

The Season 2 motif includes bees and flowers. There’s also the word ‘content,’ referring to several relationships in Bridgerton’s society. Moreover, in later episodes, mirrors gain prominence as we see many characters amid their duplicitous actions. Between fooling others and even themselves, there’s plenty of drama to go around!

So from the first sequence, a bee hovers over some flowers as Duchess Daphne of Hastings returns home.

What’s the first sequence’s special occasion, you may be asking? The presentations of the new young ladies to the Queen of England, of course! Just like Daphne did a year prior — and to great success. Now, it’s her sister Eloise’s turn.

But Eloise doesn’t seem ready, as she’s trying her best to hold off her presentation as long as possible. After all, she is up against the strong-willed Queen Charlotte.

There are plenty of royal intrigues to go around, too!

And why wouldn’t Eloise be afraid of disappointing her monarch? From her first scene, the Queen marks the beginning of the Season with a challenge. “I yearn for someone fresh, unexpected, to turn this season on its head,” she declares to her royal servants.

(And, not to head into spoiler territory, but this particular Season, both in-universe and not, is way more exciting than the last one.)

Speaking of the Queen, it also seems that Lady Whistledown lives rent-free in the Queen’s head! She’s still irritated at how the gossip column author took shots at her actions. Not only that, but she got off scot-free, too!

And during the presentations, just as Eloise makes her grand debut, the first of Lady Whistledown’s issues crashes the season.

The entire ‘Lady Whistledown is Penelope’ storyline was established in Season 1, so no calling spoilers here! In Season 2, we now focus on the youngest Featherington lady and her business exploits.

Last year, Penelope as Whistledown caused quite a stir, producing fresh tea — that is, drama — and directing the ton to the juiciest matters at hand. With the Featherington family reeling from the scandals of Season 1, Penelope is doing her best to keep at it with her gossip column.

But what happens when her business gets a bit too much to handle? Her best friend Eloise Bridgerton is hot on her trail, and so is the Queen of England, out to catch the columnist.

Well, this season, Penelope might need a bit of help. Part of that help comes from her cousin Jack, the new Lord Featherington, who’s come to aid the family. The other part? That’s for you to discover.

The Viscount Who’s Looking for His Viscountess

Anthony is back at it again, being the lord of the house. This year, he aims to make a Viscountess out of the eligible ladies in town. So he hunts for one during a montage set to a string version of Nirvana’s Stay Away.

As we’ve just started the season, his search is a fruitless endeavor.

But, as he’s about to give up, he takes a ride on his horse, coming across a woman in a brilliant cloak, racing on her steed. Anthony is impressed by this mystery woman’s horseback skills and quick wit! The viewers can almost see those sparks.

We later find out that the mystery woman’s name is Kate Sharma. Not only that but her mother, Lady Mary, is an old friend of Lady Danbury.

Lady Danbury is best known as the remarkable, wise old woman who can tell the Queen of England her thoughts. She also advised many others, including the Bridgertons’ mother, Lady Violet.

In addition, Lady Danbury sponsors the Sharmas in their bid to find their youngest daughter Edwina a husband.

From the moment Anthony meets Kate, the two trade barbs and grow a feeling of (seemingly) mutual dislike. In the absence of their Appa, Kate has become the disapproving relative who bans some of the edgier suitors courting the precious jewel of the family. Also, Kate knows that Anthony’s desires don’t align with Edwina’s.

So begins a rivalry between Kate and Anthony. The former tries to steer her sister away from the latter, but we find that the two are alike. A little bit too alike. And, well, anything past this risks spoiling the intrigue of an Enemies to Something More plot, with a side of Love Triangle.

However, part of the bee theme stems from a deeply traumatic incident from Anthony’s upbringing. It resulted in him shelving his desires to take care of his family. Kate can relate, considering that her family is without their father too.

Take our word for it, Bridgerton Season 2 saw the good they did last season with Saphne (Simon + Daphne) and gave us an even more irresistible couple. Who are they? Watch the series to find out. But, then again, you might already know who.

Departure from the books

In the books, the Sharmas were known as the Sheffields. Plus, their backstories in the show differ significantly from the book series. The Sheffields of the books come from the English countryside.

However, as befits the colorful casting in the series, Kate and Edwina are knowledgeable about their roots. Edwina is even said to play the sitar and the murali! Kate admits she hates English tea in later episodes, as it isn’t exactly to her liking.

Not only that, but we totally called the significance of the marigolds from the Official Trailer. Who’s getting married? Can’t tell you; it would spoil the whole thing!

Die-hard fans may have taken the weekend to binge the entire Bridgerton season. Perhaps, they might have even started from the first one. However, if you aren’t on this period drama series hype train, you might want to reconsider.

If you love elegant language, fantastic costumes, thrilling side plots, and slow-burn romances, Bridgerton might be the series for you. It’s true for a lot of people, at least.

me realizing that I have to wait another year for season 3 to drop only to binge watch it in a day again #bridgerton #bridgertonS2 pic.twitter.com/RrQviYcQUM

However, if you want to get a sense of what’s to come (or maybe just flat out spoil yourself on the story), read the books! Here’s a list of the Bridgerton book series with a short rundown of each plot.