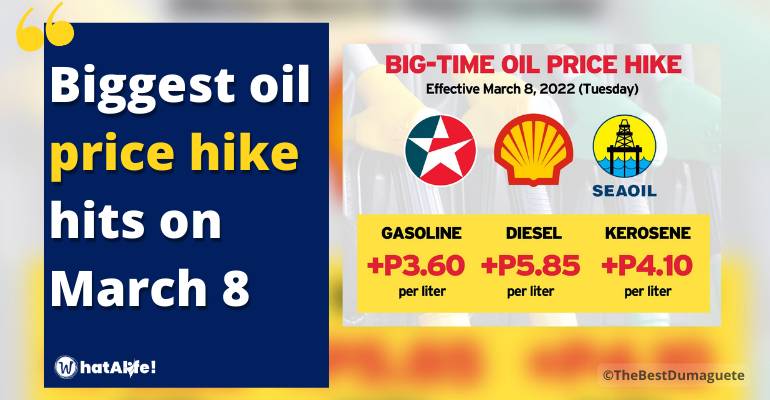 MANILA, PHILIPPINES — Consumers should prepare for a significant increase in the price of petroleum products. Fuel prices will rise for the tenth time in a row, but this time the increase will be much larger and will go into effect on Tuesday, March 8 2022.

The fuel price now for Caltex, Seaoil, and Shell will also increase. Their kerosene will increase by PHP4.10 per liter.

Unioil will also raise the price of diesel by P3.85 per liter and gasoline by P2.00 per liter which will take effect on Tuesday.

However, not all fuel companies would impose the same hike.

For the past 10 weeks, local oil prices have been rising.

According to news agency PTI, which cited industry sources, petrol and diesel prices must be raised in order for fuel merchants to break even.

“With the last phase of polling ending on Monday, it is now expected that the government will allow state-owned fuel retailers to return to daily price revision,” an industry insider said.

Discussions to ban Russian crude oil in the United States and Europe, as well as delays in talks to restore the nuclear deal with Iran, are the newest factors for this week’s surging oil prices on the global market.

Fuel prices have been adjusted daily since 2017 in accordance with the benchmark international rate for the previous 15 days. However, rates have been frozen since November 4, 2021.

With the huge price hike on Tuesday morning, the year-to-date price adjustment for gasoline is PHP13.25 per liter, PHP17.50 per liter for diesel, and PHP14.40 per liter for kerosene. – WhatALife!

Also Read: Diesel prices have risen by over P6 per liter