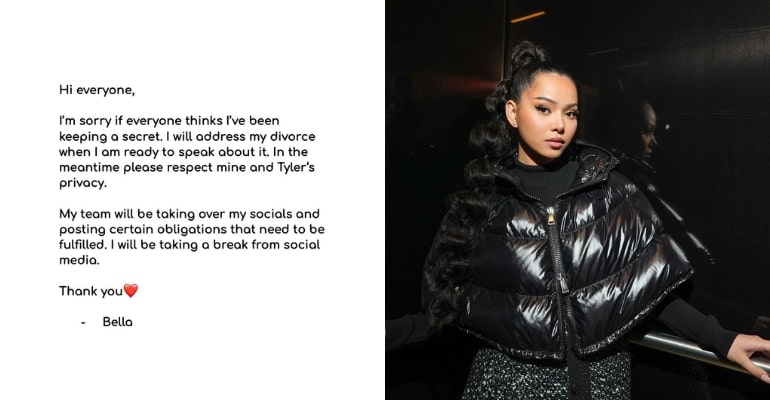 USA — Filipino-American TikTok sensation Bella Poarch, real name Denarie Poarch, confirmed that she’s getting divorced from her husband, Tyler Poarch. However, she asked the public to respect her privacy and that of her husband.

“I’m sorry if everyone thinks I’ve been keeping a secret. I will address my divorce when I am ready to speak about it,” she said.

Bella also asked for privacy as she would take a break from social media.

“In the meantime please respect mine and Tyler’s privacy. My team will be taking over my socials and posting certain obligations that need to be fulfilled. I will be taking a break from social media. Thank you,” the post read.

There had been no reports that Bella was already married, but the social media personality stated that “irreconcilable differences” was the reason behind the divorce.

According to the entertainment media outlet TMZ, they obtained documents that Bella and Tyler tied the knot four years ago.

As the online tabloid broke the news of Bella’s divorce filing in Los Angeles last November 6 to end her marriage to Tyler, the divorce documents showed that the social media personality got married in January 2019. However, the two did not have any children, and Bella did not want her or Tyler to pay any kind of spousal support.

Bella Poarch has over 90.6 million followers on TikTok. She became a viral sensation after posting a video lip-syncing to Millie B’s “M to the B” back in August 2020.

That same year, she was also in the spotlight due to a Rising Sun tattoo on her body which was visible in a video she posted online. Koreans criticized Poarch’s tattoo with racist remarks, to which the Filipino fans expressed their disappointment. – WhatALife!/Zed