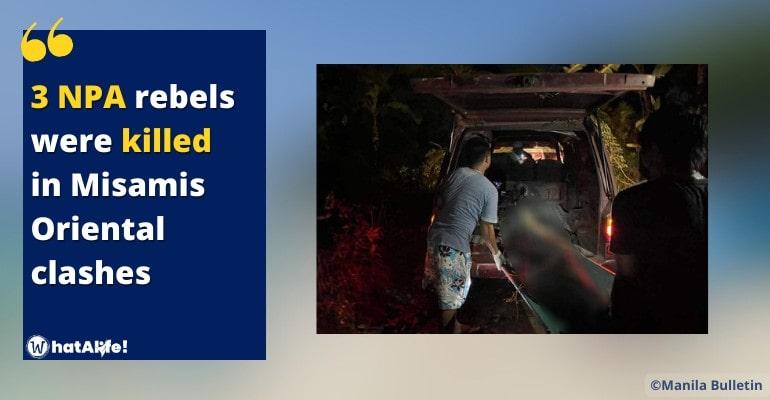 Around 7 a.m., the first contact occurred. Forces were executing military operations in the hinterlands of Barangay Plaridel, Claveria town while following the remnants of a rebel hideaway identified in the region.

“The Army has been merciful to the armed rebels in recent months, urging them to return to the folds of the law and live a peaceful and normal life, thus, avoiding unnecessary death because it is our duty as soldiers to protect and secure the lives of the innocent and the progress of Misamis Oriental,” Canatoy said

“Even during election season, we will remain vigilant against this terrorist group and anyone else planning to incite violence in MisOr. We will not hesitate to use force against peacebreakers and other threat groups that continue to use terrorism because we do not tolerate it,” he added.

Canatoy also claimed that no government casualties have been reported.

The bodies were handed over to the Barangay Council and the Municipal Disaster Risk Reduction and Management Office in Balingasag, where they’ll be delivered to their relatives in a respectful and timely manner.

The United States, the European Union, the United Kingdom, Australia, Canada, New Zealand, and the Philippines have all designated the CPP-NPA as a terrorist group. – WhatALife!