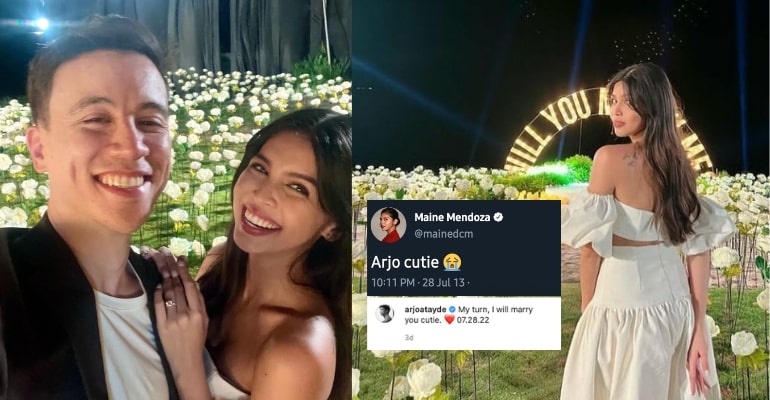 MANILA, PHILIPPINES — On July 29, Maine Mendoza shared a series of selfies of herself and Arjo Atayde announcing to fans that they are engaged.

Maine showed the massive engagement ring on her finger on social media, writing “Wait, whaaaat??? We’re engaged?!” in the caption.

Arjo also shared a photo of Maine on Instagram with the caption, “My turn, I will marry you, cutie.”

Ria, Arjo’s sister, also posted pictures of Arjo’s proposal that day. It appeared to be a primary production with a flower field, lights spelling out “Will You Marry Me,” a view of the sea, and fireworks.

“So excited to officially welcome you into the family [Maine],” she continued. “Stay happy and in love! Congratulations to the two of you.”

In December 2021, Maine and Arjo celebrated their third anniversary of dating. In January 2019, they initially made their relationship public.

In movies like My Bebe Love: #KiligpaMore and Imagine You and Me, Maine and Alden Richards were one-half of the famous love tandem known as AlDub.

Maine also co-starred with Carlo Aquino in the movie Isa Pa With Feelings and is the author of the autobiography Yup I Am That Girl.

Arjo is renowned for his role in the classic series Ang Probinsyano and his award-winning performance in the show Bagman.

In June 2022, Arjo began serving as a representative for the first district of Quezon City.

Also read: From a whirlwind romance in 2000’s leading to break up, Jennifer Lopez and Ben Affleck finally tie the knot