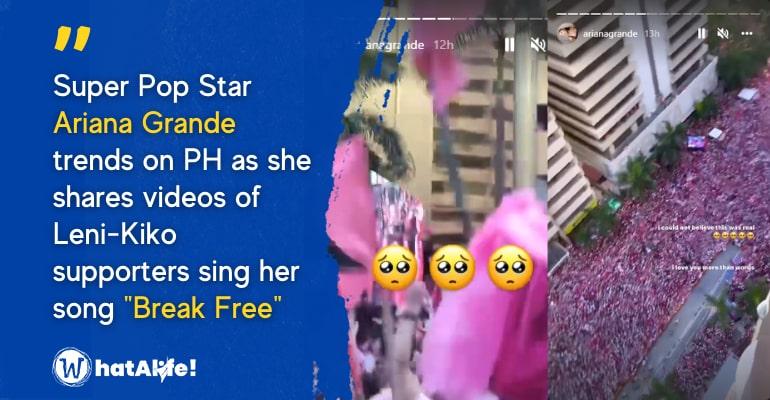 MANILA, PHILIPPINES — Ariana Grande was one of the top trending topics in the Philippines on Monday morning after she shared an Instagram story video of supporters of PH Vice President Leni Robredo and Senator Kiko Pangilinan singing her hit song “Break Free.”

Robredo and Pangilinan are running mates for the positions of President and Vice President in the upcoming May 2022 Philippine elections.

“Break Free” is a song by Ariana Grande that features Russian-German music producer Zedd. It premiered on July 2, 2014, and was written by Savan Kotecha and produced by Zedd and Max Martin.

The inspiring moment was captured on aerial video, and Ariana Grande couldn’t help but react to how her song was empowering the crowd.

“I could not believe this was real, I love you more than words,” she wrote on Instagram.

The singer captioned the video "I could not believe this was real. I love you more than words." pic.twitter.com/waFMwxiOOM

She also shared videos where people can be seen jumping along in the rally.

This is not the first time Vice President Leni Robredo has been recognized by an international popstar as a result of kakampinks’ efforts. To look back, Cher, a music icon in the US tweeted about the presidential candidate ‘Let a woman do it.’

According to organizers, the crowd turnout in Pasig was the largest of all Leni-Kiko sorties across the country, surpassing Bacolod’s 70,000.

Flowers and streamers graced the event, which was attended by people dressed in various shades of pink, many of whom brought their own posters and slogans as a form of self-expression.