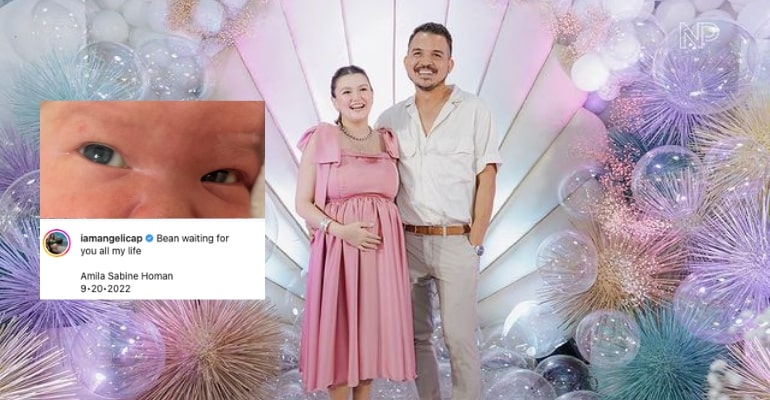 MANILA, PHILIPPINES — Actress Angelica Panganiban recently announced on Instagram that she had given birth to her first child, a daughter named Amila Sabine Homan.

Amila was born on September 20, 2022. Panganiban captioned her post with “Bean waiting for you all my life,” as she has fondly referred to her daughter as “Bean” during her pregnancy.

Panganiban first made the announcement of her pregnancy back in March with her non-showbiz boyfriend of two years, Gregg Homan.

Homan is a yacht designer from Subic.

When the couple made their pregnancy public, it was with a quirky tone known to the actress.

(Finally!!! I can finally embody the most important role I have been waiting for in my life. I am going to be a MOTHER.)

A month ago, the new mother also shared her maternity photos with her fans. One very notable photo was where she’s wearing a red flowy dress while standing on a yacht, which may be seen as a big salute to her partner’s profession.

Another milestone that the actress is happy to share is her baby shower.

(A baby shower finally took place in my life. It’s a very good feeling to be with family, friends, and relatives who are happy and supportive in one of the most important parts of my life that I’ve always dreamed of.)

Check out her baby shower photos below:

Congratulations to the couple! – WhatALife!