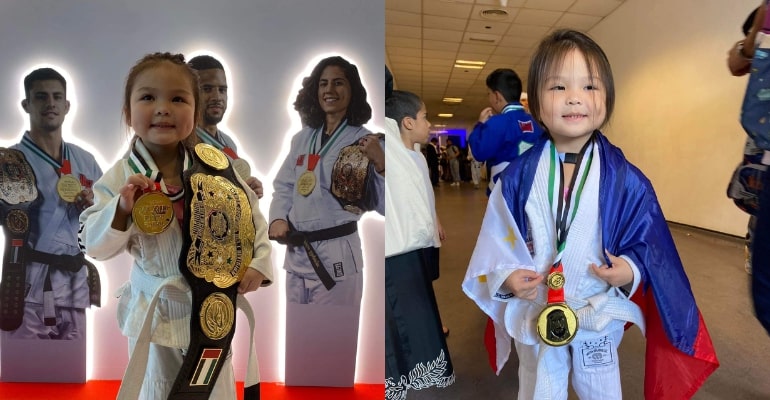 The DEFTAC-Ribeiro Jiu-jitsu Philippines kiddie fighter made her opponent Vercosa tap out via verbal submission in their match. Having won gold in the kids’ 1 Under-16 kg event, she is now the country’s youngest jiu-jitsu world champion.

Aleia is the daughter of the Philippines’ MMA (Mixed Martial Arts) founding father and URCC (Universal Reality Combat Championship) founder, Alvin Aguilar. Her mother is Maybelline Masuda, the first Filipino winner of the Jiu-jitsu World Champion in 2009. She is also the first-ever gold winner of the country in the 2014 Asian Beach Games.

“I’m beyond happy that my baby girl is now the Philippines’ youngest World Champion. We will continue to work hard to bring honor to our country,” her father said.

Before her championship campaign, Aleia won against Maria El Halabi of UAE, in her semifinal match, with a score of 6-0.

“We are so all proud of you. Even at such young age you are already so organized and hardworking in everything you do. From academics to sports you always excel because you always work hard. I remember when you were two years old and you said you wanted to be the greatest,” her father added.

She went to the event accompanied by her mother, Maybelline Masuda, who watched Aleia’s match from the far side.

Masuda recounted how after she applied a heavy sprawl, Aleia’s opponent tapped out and gave up on continuing the fight. She remarked that the armbar was Aielle’s favorite move.

“She was born into Jiu-jitsu. I was bringing her with me to training after giving birth to her when she was as young as three weeks old. Every training day, competition day, she grew up with Jiu-jitsu in her life, and it eventually became her dream to compete,” said Masuda.

“I was more nervous watching her compete then I’ve ever felt when I compete myself. I couldn’t sleep the night before but we pulled through and she got what we came here for,” she added.

Along with her mother and the rest of the team, Aleia will return to Manila on November 15, Tuesday. – WhatALife!/Zed