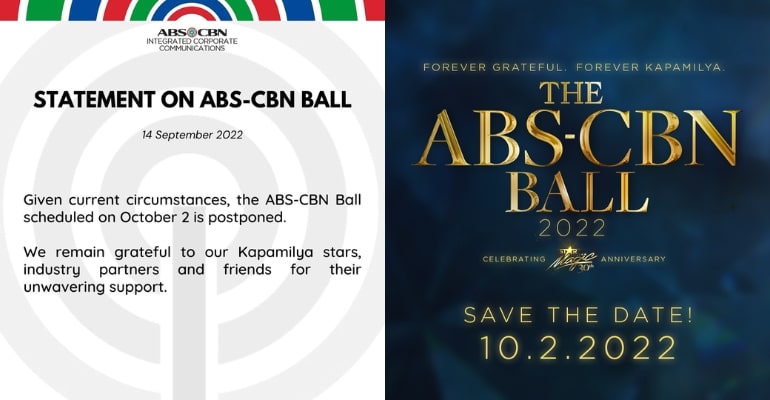 MANILA, PHILIPPINES — Due to “current circumstances,” the ABS-CBN management has decided to postpone the October 2 date of the ABS-CBN Ball 2022.

“Given current circumstances, the ABS-CBN Ball scheduled on October 2 is postponed. However, we remain grateful to our Kapamilya stars, industry partners, and friends for their unwavering support,” it said.

See the announcement below:

The actress Barbie Imperial also shared a message about the delay on her Instagram stories. The statement, probably sent to those who had been invited, stated that the ball would be held “at a more opportune time,” even though it had specified no new date.

The 2022 ball was announced early this month as a “night of gratitude” with the tagline, “Forever grateful, forever Kapamilya.”

The annual celebration and charity event, first hosted in 2006 as the Star Magic Ball and named after the network’s talent agency, changed its name to the more inclusive ABS-CBN Ball in 2018 to include Kapamilya performers from other management companies.

The ABS-CBN Ball is scheduled to make its first appearance this year since the pandemic began and since the network was forced off free television after losing its broadcast franchise. The crisis led to the layoff of thousands of employees and the departure of Kapamilya stars as ABS-CBN attempted to recover.

Since then, ABS-CBN has developed into the country’s highest content provider, with various local and international partnerships. It is also a digital entrepreneur, with its shows readily available on multiple online platforms.

The 30th anniversary of Star Magic will be celebrated during this year’s ABS-CBN Ball, in addition to its theme of gratitude for overcoming the broadcast issue. –WhatALife!/Brix