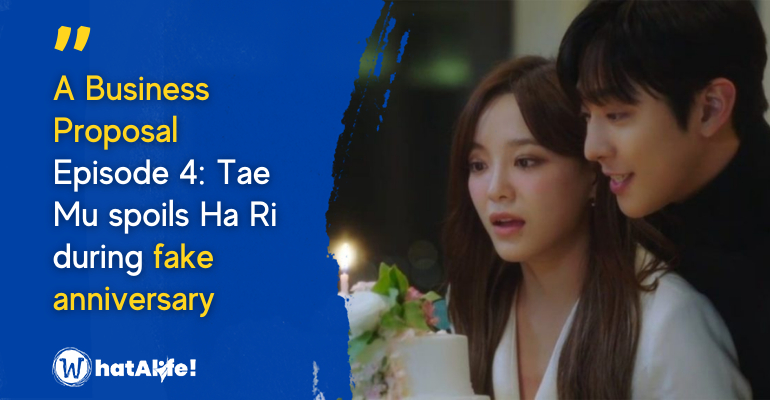 SEOUL, SOUTH KOREA — KDrama ‘A Business Proposal’ (streaming on Netflix and airing in the SBS network) features the first fake anniversary of its main leads, Ahn Hyo Seop And Kim Sejeong, on its 4th episode.

The latest drama in South Korea, which is a romantic comedy, is from a famous web novel adapted into a webtoon. The Korean drama has a storyline about an office employee who took her friend’s place and unknowingly got into a blind date with her CEO.

‘A Business Proposal’ stars Ahn Hyo Seop playing the role of Kang Tae Mu, the chaebol heir known for his brain and beauty to his richness and wealth. Kim Sejeong plays the role of Shin Ha Ri, a food researcher who stands in for her best friend Jin Young Seo, known as Seol In Ah, a chaebol heiress, in her blind date with the chaebol heir, Kang Tae Mu.

Episode four of ‘A Business Proposal’ was released on March 8 at 10 PM KST.

In the fourth episode of the drama, the fake couple celebrates their first fake anniversary. Despite not being in a relationship, Kang Tae Mu spoiled Shin Ha Ri with expensive things as they went on their shopping date as part of their anniversary celebration.

In a report by allkpop.com, research from Nielsen Korea shows that the previous episode 3 of the Korean drama received a higher national rating in South Korea with a percentage of 8.1.

In the overall rating of the Korean drama shown in IMDb, ‘A Business Proposal’ has recently appeared a rate increase from 8.5 to 8.8.

As the Korean drama releases the latest upcoming episodes, the nationwide rating is also set to increase. – WhatALife!