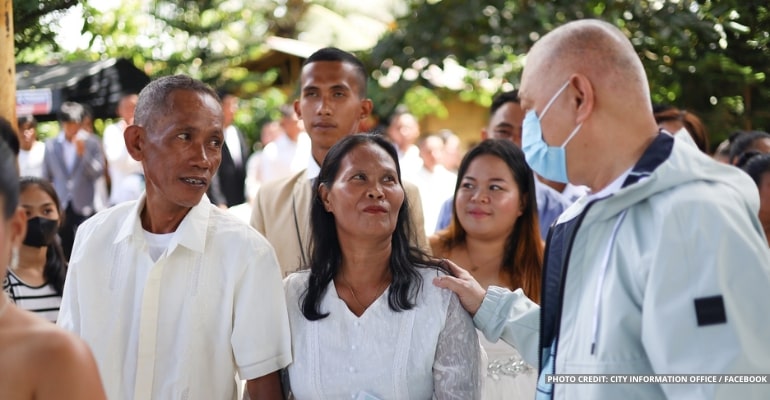 CAGAYAN DE ORO CITY, PHILIPPINES — Many couples were successfully married during the mass wedding or ‘Kasalan ng Bayan’ led by Mayor Klarex Uy, August 25, in barangay Tignapoloan of this city.

This is part of the ‘Klarex Village Service’ outreach program by Mayor Klarex Uy, which was also launched on the same day.

During the mass wedding, Mayor Klarex Uy reminded every couple to follow CHRIST (‘Communication, Humility, Respect, Intimacy, Service and Trust’) as the center of their marriage to make it successful.

(CHRIST is the symbol and guide of a family. He is the source of everything…. Of peace and happiness, and all the blessings you ask for. So do not forget Him; in all of your requests for assistance and blessings, you should always look for Him, in every low area of life, call for Him, and in every success, thank Him. Do not forget God if you want to be successful as a couple.)

(We are thankful for Mayor Klarex Uy for the Kasalan ng Bayan. We are very happy that we were given this opportunity. Thank you, May Klarex Uy.)

Ruel and Susan were recognized as the longest married couple, which is why Mayor Klarex Uy gave them a consolation prize of P10,000. They have been together for 22 years and have three children.

Each of the couples received a free cake, wine, and Lechon from Pamilya Uy. There were also souvenirs they received, such as doughnuts from Krispy Kreme, items from American Surplus, a fruit basket from City Councilor Roger Abaday, and others.

The following individuals acted as principal sponsors of the event:

The event ended with Mayor Klarex signing the marriage certificates of the couples and a photo op.