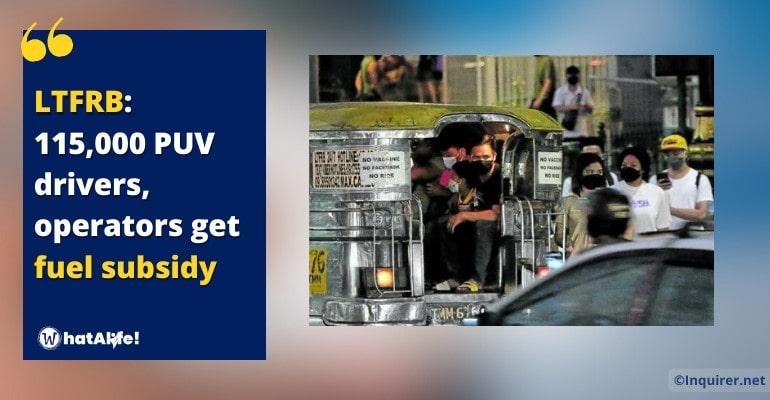 According to the Land Transportation Franchising and Regulatory Board (LTFRB), some 115,000 public utility vehicle (PUV) drivers and operators have received government fuel subsidies to assist them to cope with rising fuel prices.

(Since we started providing fuel subsidy on March 15, we have distributed around 115,000 fuel subsidy beneficiaries through Landbank.)

According to LTFRB Regional Director Zona Tamayo, disbursement for new beneficiaries, which also include TNVS and UV Express drivers, could start next week.

Apart from gasoline subsidies, Tamayo said that the agency worked with the Department of Budget and Management (DBM) to provide a P7 billion budget for the service contracting program, also known as libreng sakay (free ride) for commuters.

She noted out that the deployment of tricycles will be the responsibility of the local government authorities.

(Hopefully, we can start the service contracting program by April.)

The LTFRB is working with the Department of the Interior and Local Government to create a list of tricycle drivers. – WhatALife!