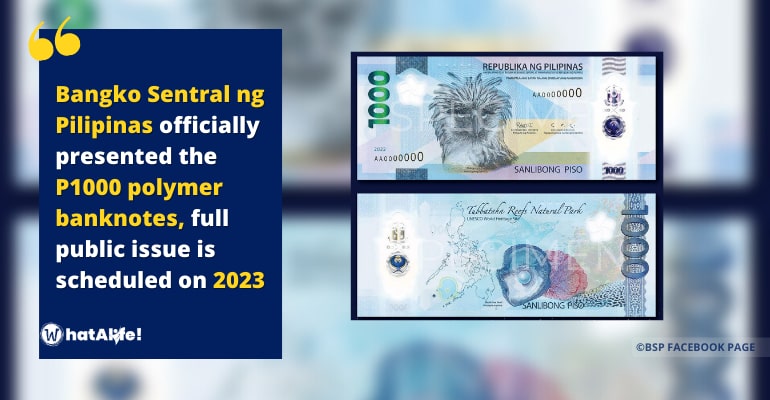 The BANGKO Sentral ng Pilipinas (BSP) plans to start piloting polymer banknotes in the 1000-peso denomination in the second quarter of this year, with the full public issue by 2023.

The first set of Philippine peso banknotes made of polymer is expected to arrive from Australia within the month, according to the BSP.

The BSP has pushed for the use of polymer banknotes, which are less vulnerable to virus and bacteria transmission.

Polymer banknotes can also be sanitized without damaging them.

Polymer banknotes, which are water and dirt-resistant, can last 2.5 to four times longer than paper banknotes in terms of durability.

Due to the complexity of the printed pictures and the modern technology employed in implementing security elements, polymer banknotes are difficult to counterfeit.

The front of the polymer banknotes will have a Philippine eagle, as opposed to the present notes, which feature World War II heroes Jose Abad Santos, Vicente Lim, and Josefa Llanes Escoda.

When the design was released in December, several organizations and Politicians condemned the removal of national heroes from the banknotes, claiming that it will deepen the country’s already-existing historical revisionism.

This is the government’s second attempt to introduce banknotes made of plastic-based materials, which it hopes will slow the deterioration of abaca-based bills.

The BSP further stated that polymer banknotes are more environmentally friendly and sustainable since they have a lower carbon footprint, consume less water and energy, and are less hazardous to the environment.